Singapore’s Scariest Attraction is a Hell Museum - Would You Go?

Haw Par Villa is a Singaporean park renowned for its unique themes of hell, afterlife, and mythology. 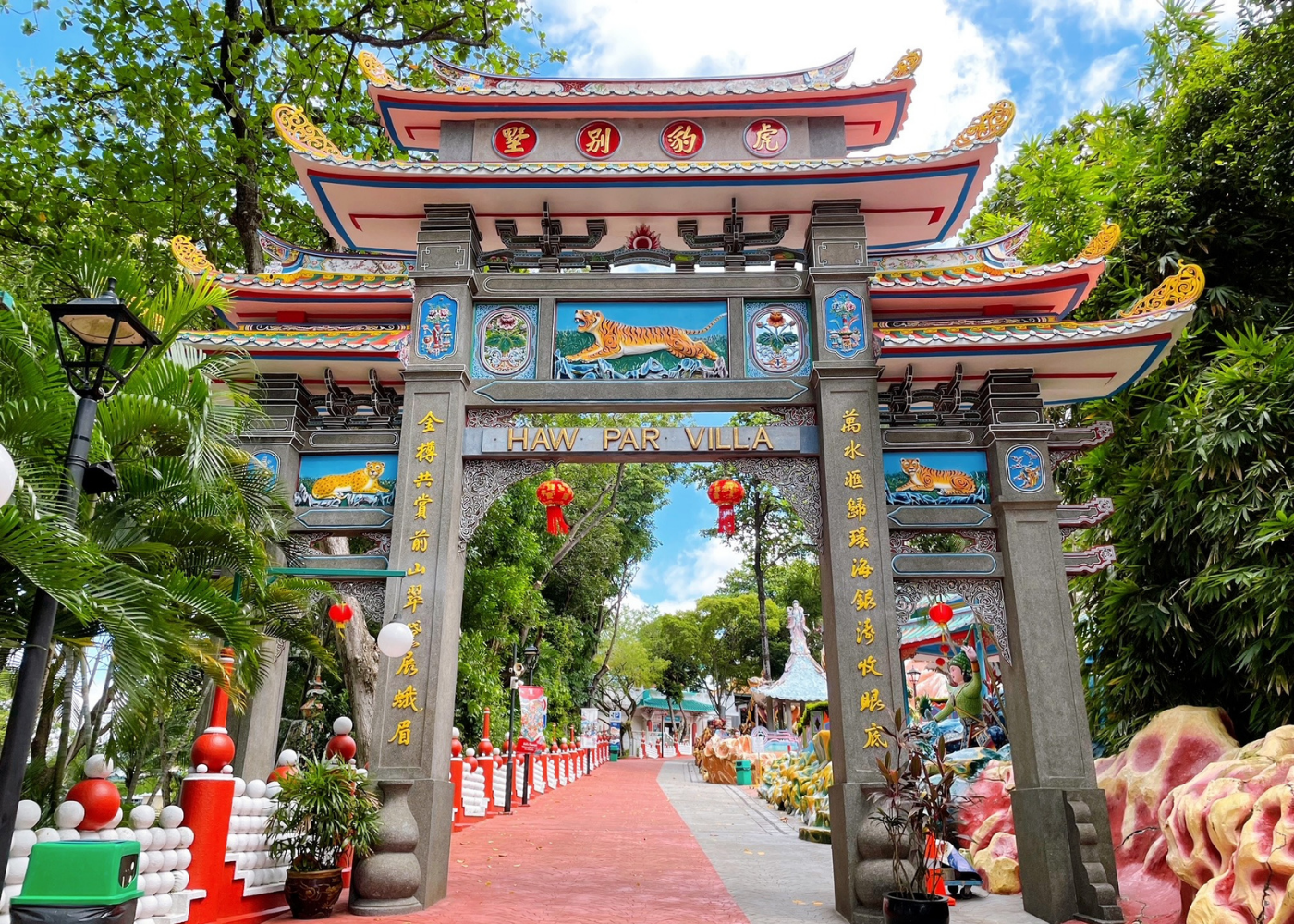 In 1937, Chinese entrepreneur Aw Boon Haw built this park and dedicated it to his brother.  Haw Par Villa Park has around 1000 statues and 150 life-size dioramas inspired by Chinese folklore and legends.  As well as the newly opened and famous Hell Museum, showing one’s journey in the afterlife. 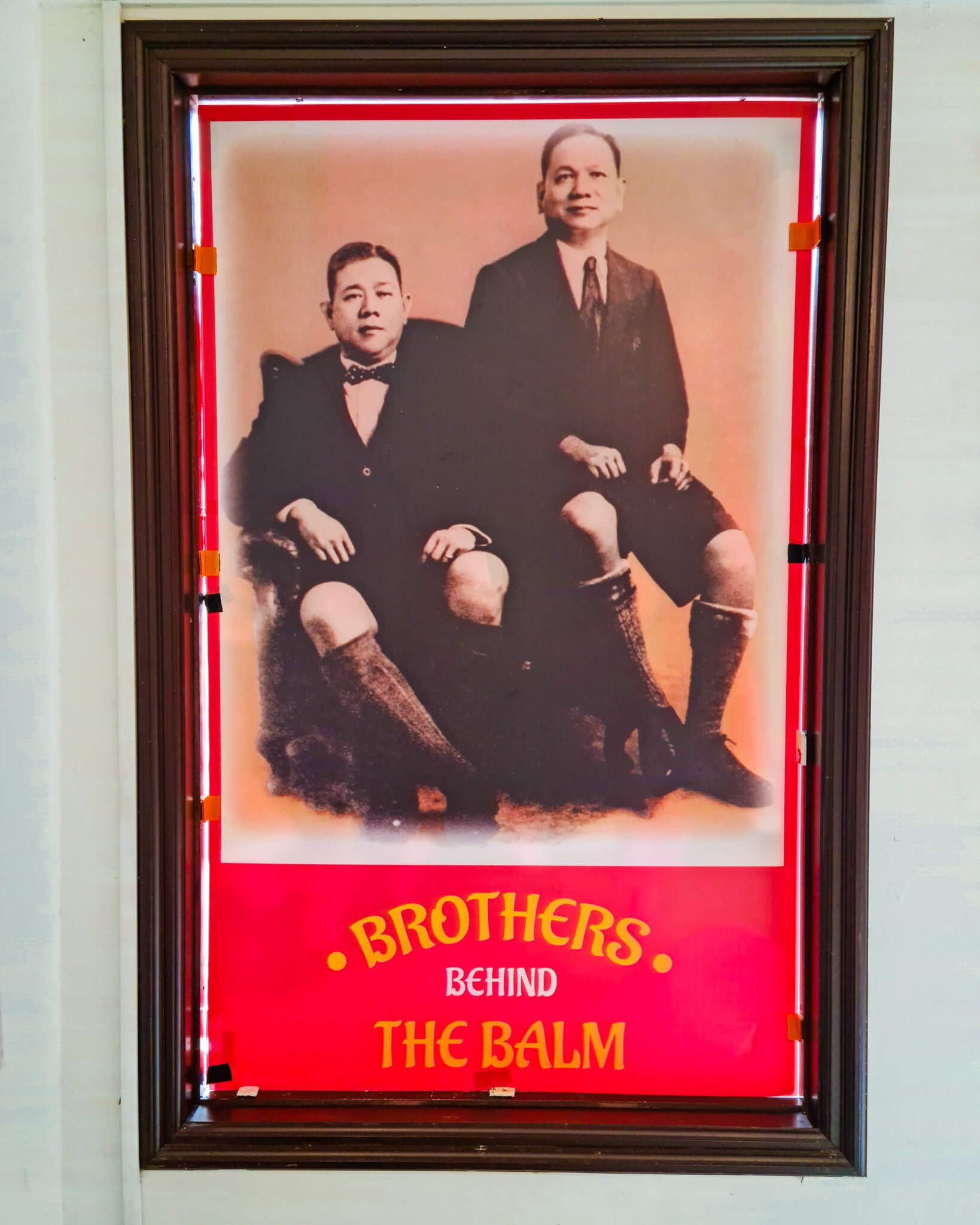 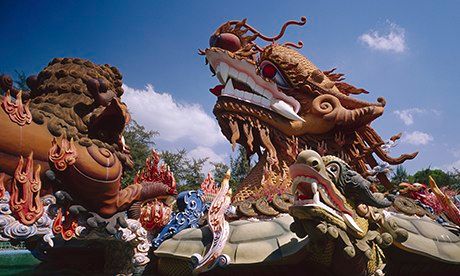 So why is the newly built Hell Museum so disturbing?

Hell Museum is most famous for depicting what occurs in the 10 gates of hell.  Here you will quite literally walk through a dimly lit stone tunnel that houses the 10 courts. 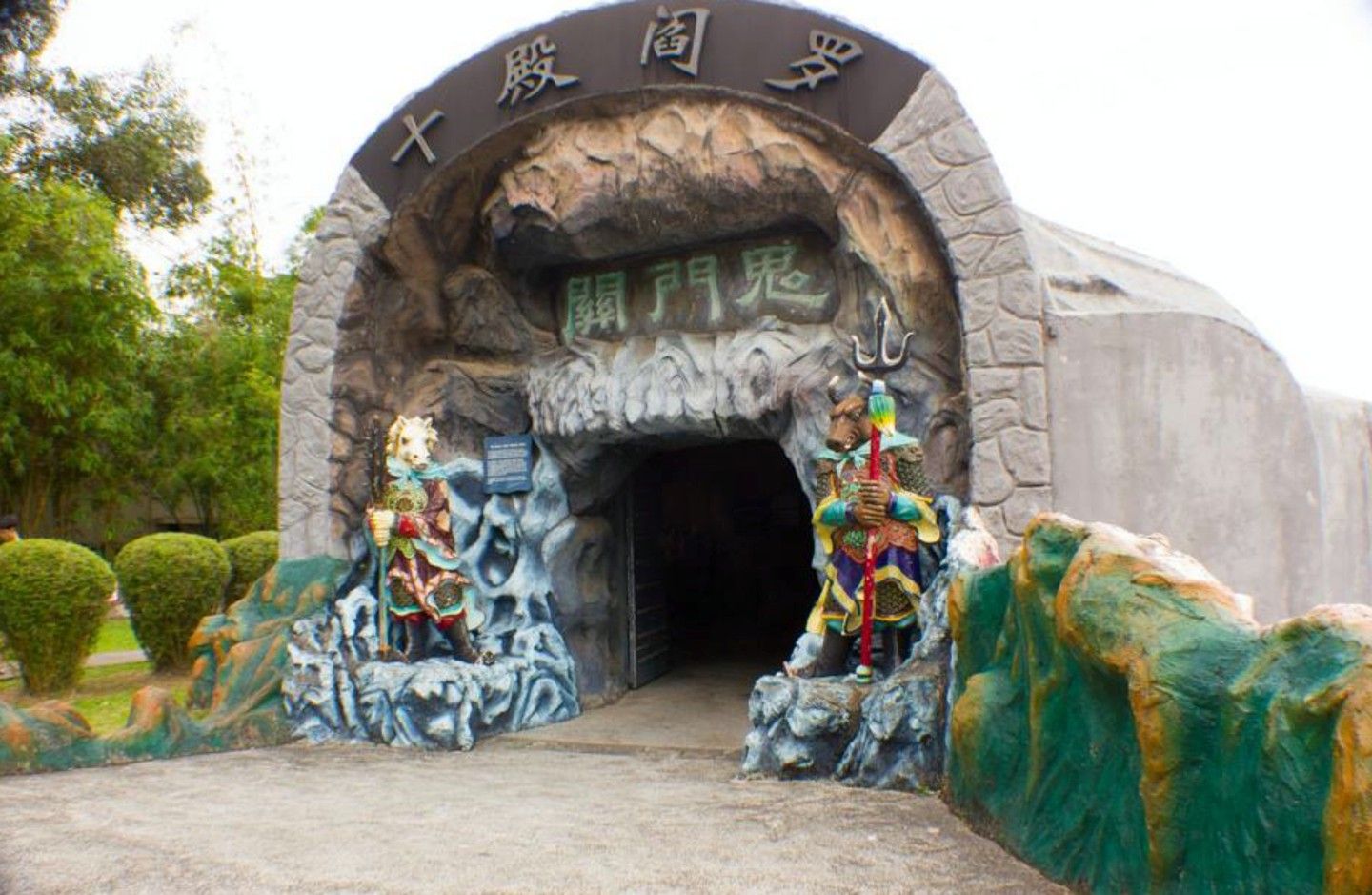 In Chinese Mythology, it is believed that a person will be sent to the first gate after passing away.  Whether you will be sent to paradise or the relevant court to be punished for your sins will be decided.  *You can expect each gate to have a gory and vivid scene of how Buddhists believe people will be punished in the afterlife.

Some of these sins include: prostitution, cursing, wasting food  & cheating on a test, while some of the punishments were depicted as boiling in oil, dismemberment & being frozen in a block of ice; the vivid depiction of the suffering and torment of each condemned is also highlighted by subtle lighting that is enough to creep you out.

Each court has a strange description of serious and inconsequential crimes being punished in painstaking detail.

Let’s look at the 4 most gruesome sculptures found in these courts: 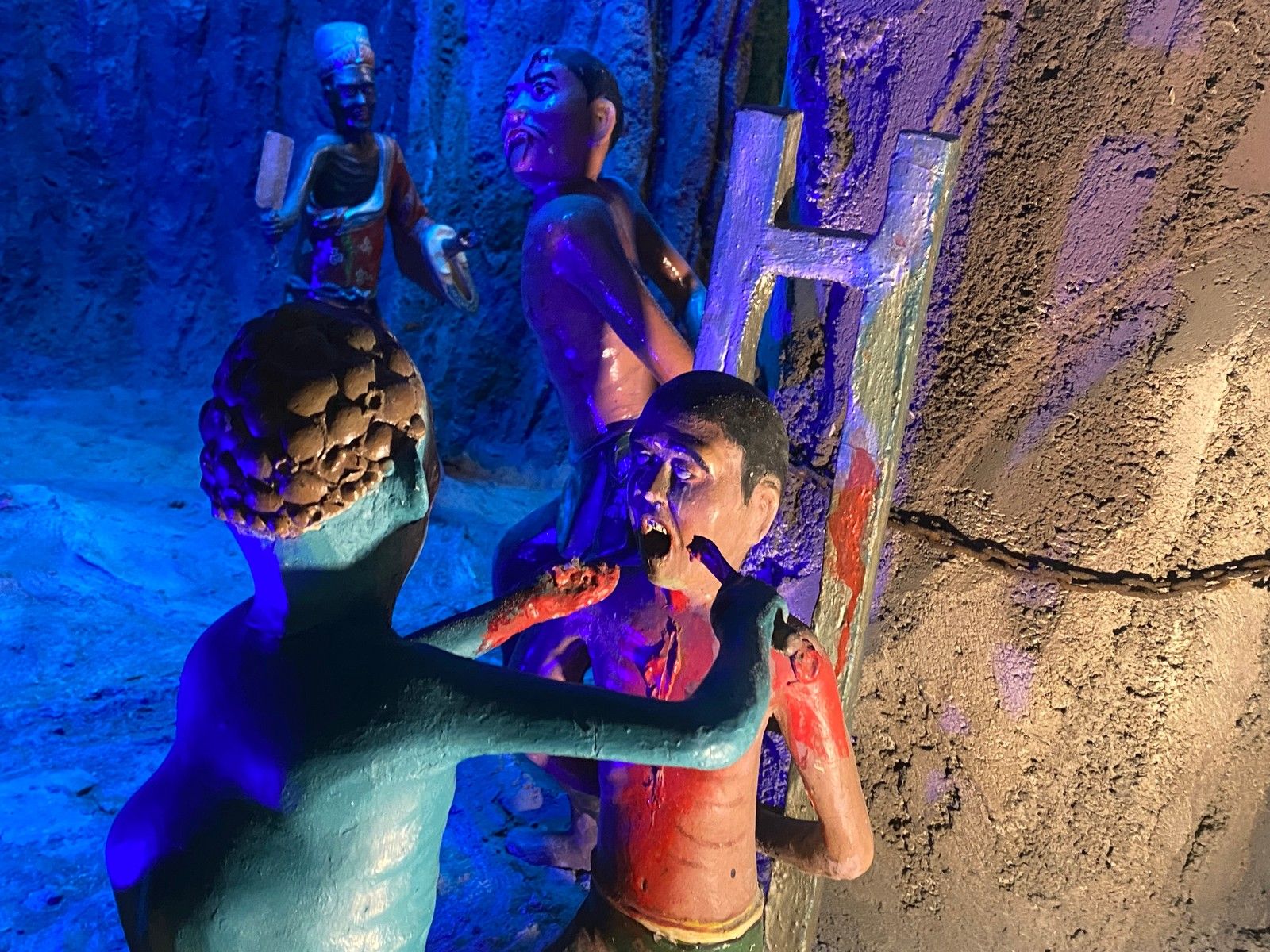 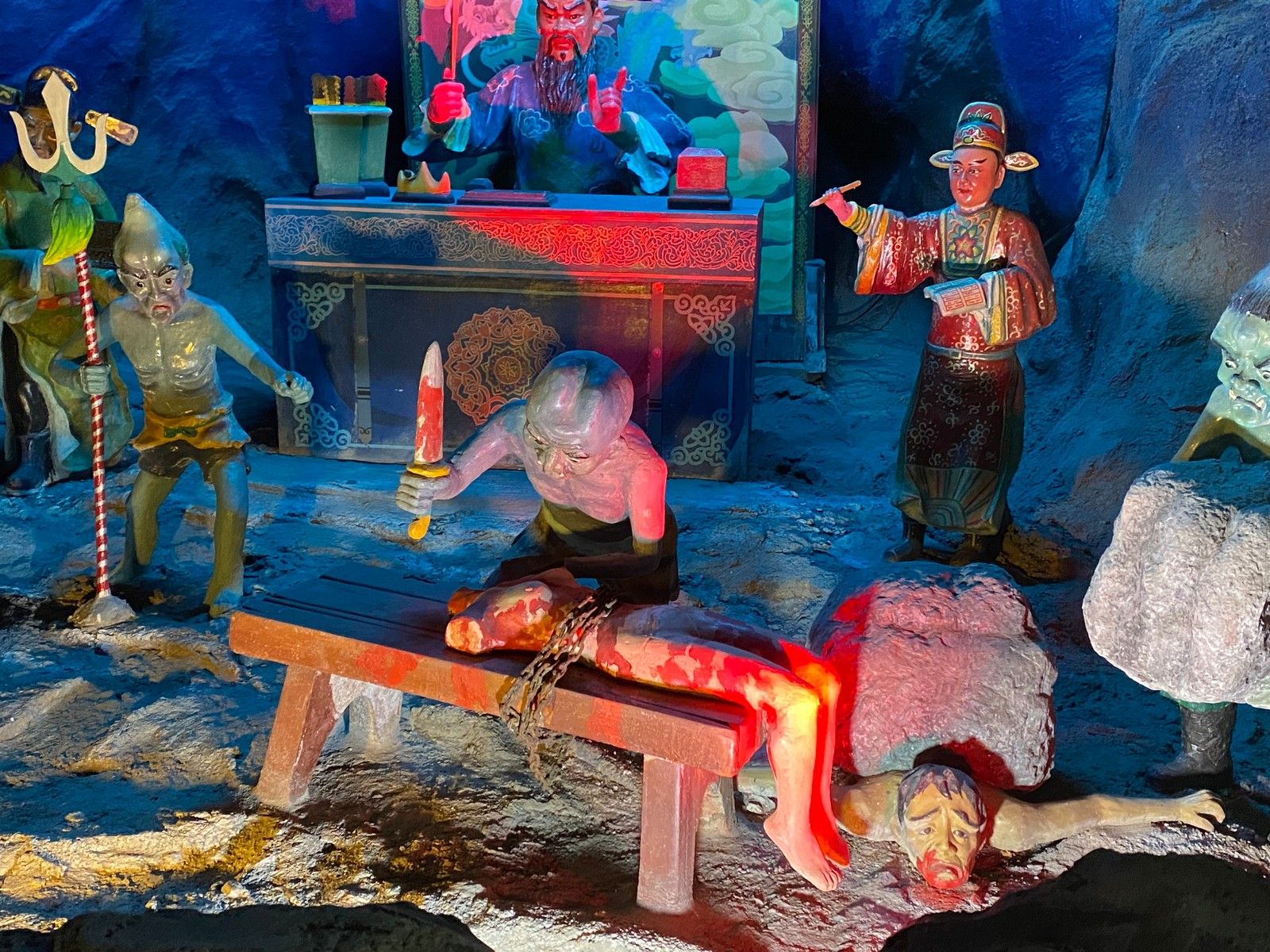 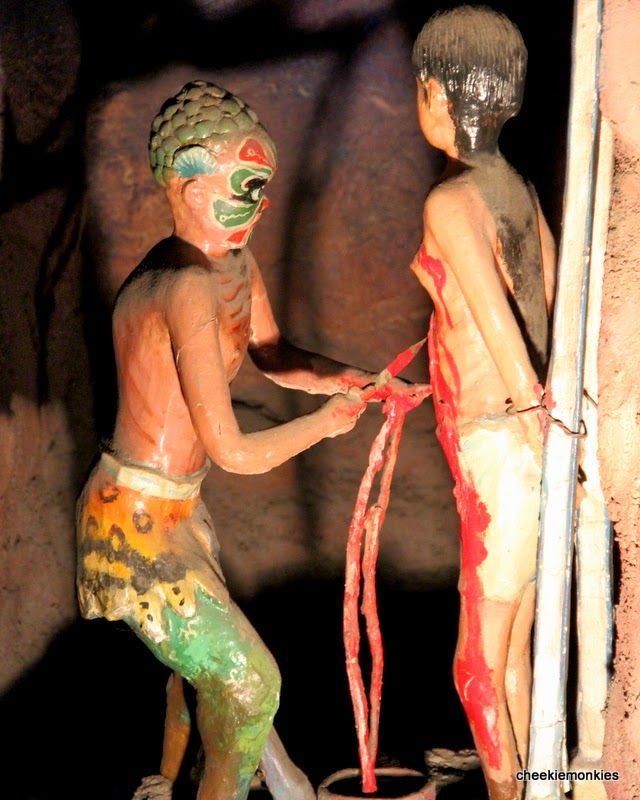 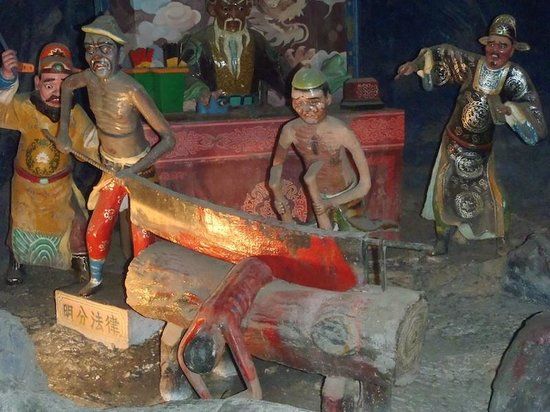 I would be lying if I said that I didn’t find this incredibly creepy and eerie.

Not all the sculptures and dioramas are gruesome and scary – the park entices disgust, curiosity, and humor.

The park also depicts Boon Haw’s deep interest and visually appealing depiction of Chinese Mythology, folklore, history, & Chinese literature.  Most people find the park’s statues and dioramas to be a bit bizarre.  Most dioramas have info-boards in English explaining the scene's meaning on display. 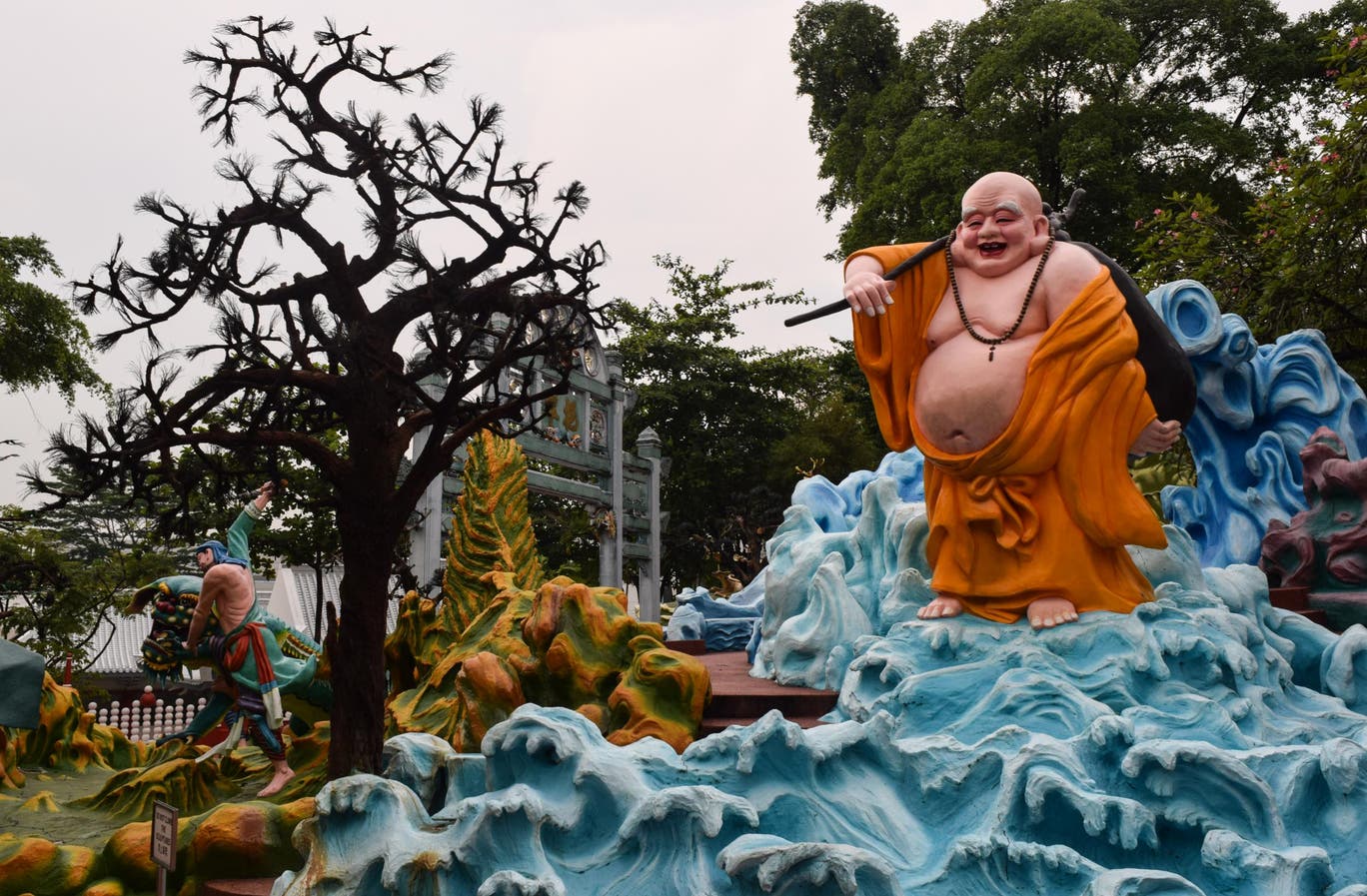 The weirdest sculptures in the park include: 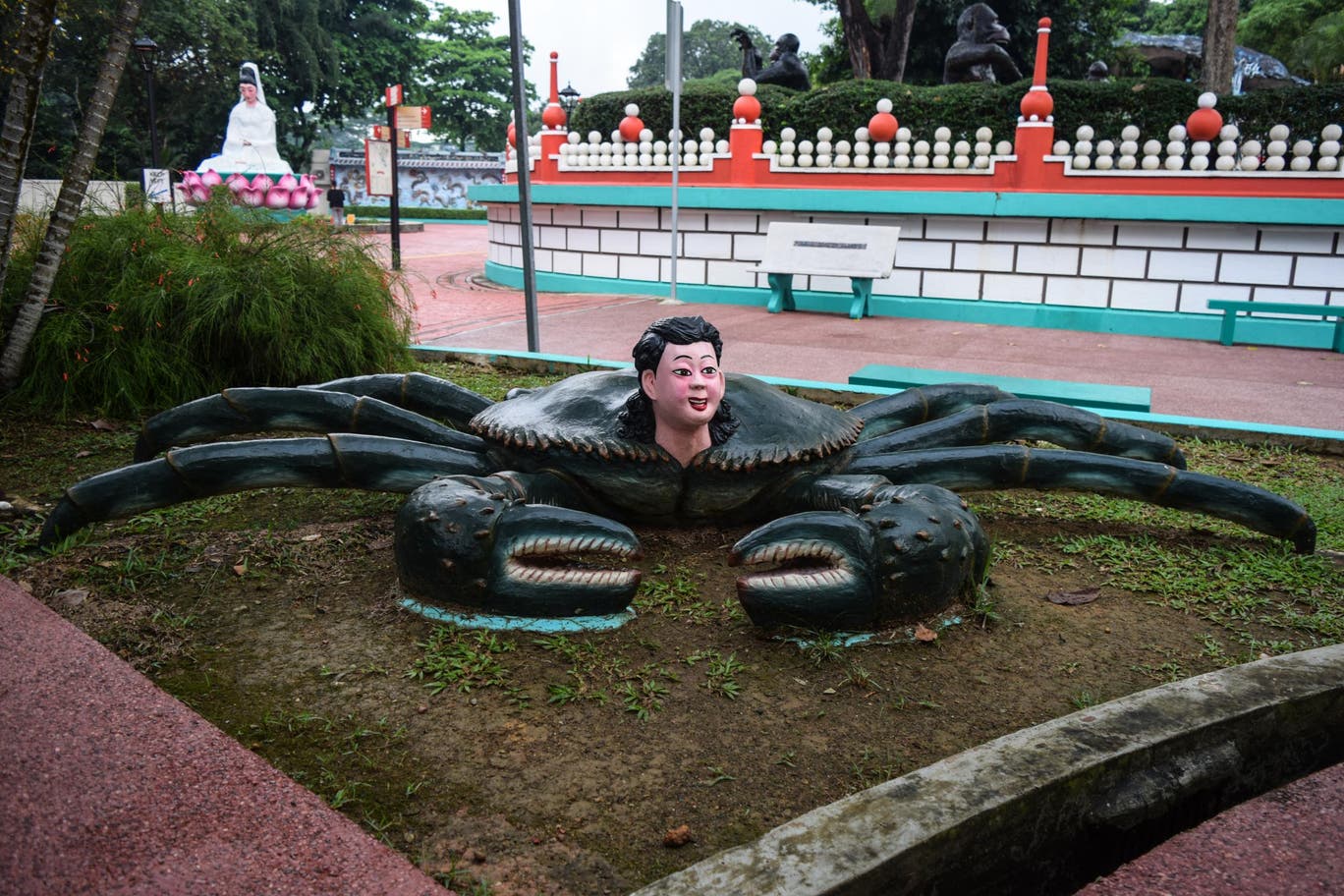 Enjoy the thrill of being afraid?  Why not consider visiting the caves descending below life-sized dioramas at night time.  People have confessed that exploring the caves at night, made half-human; half-animal statues appear much spookier. 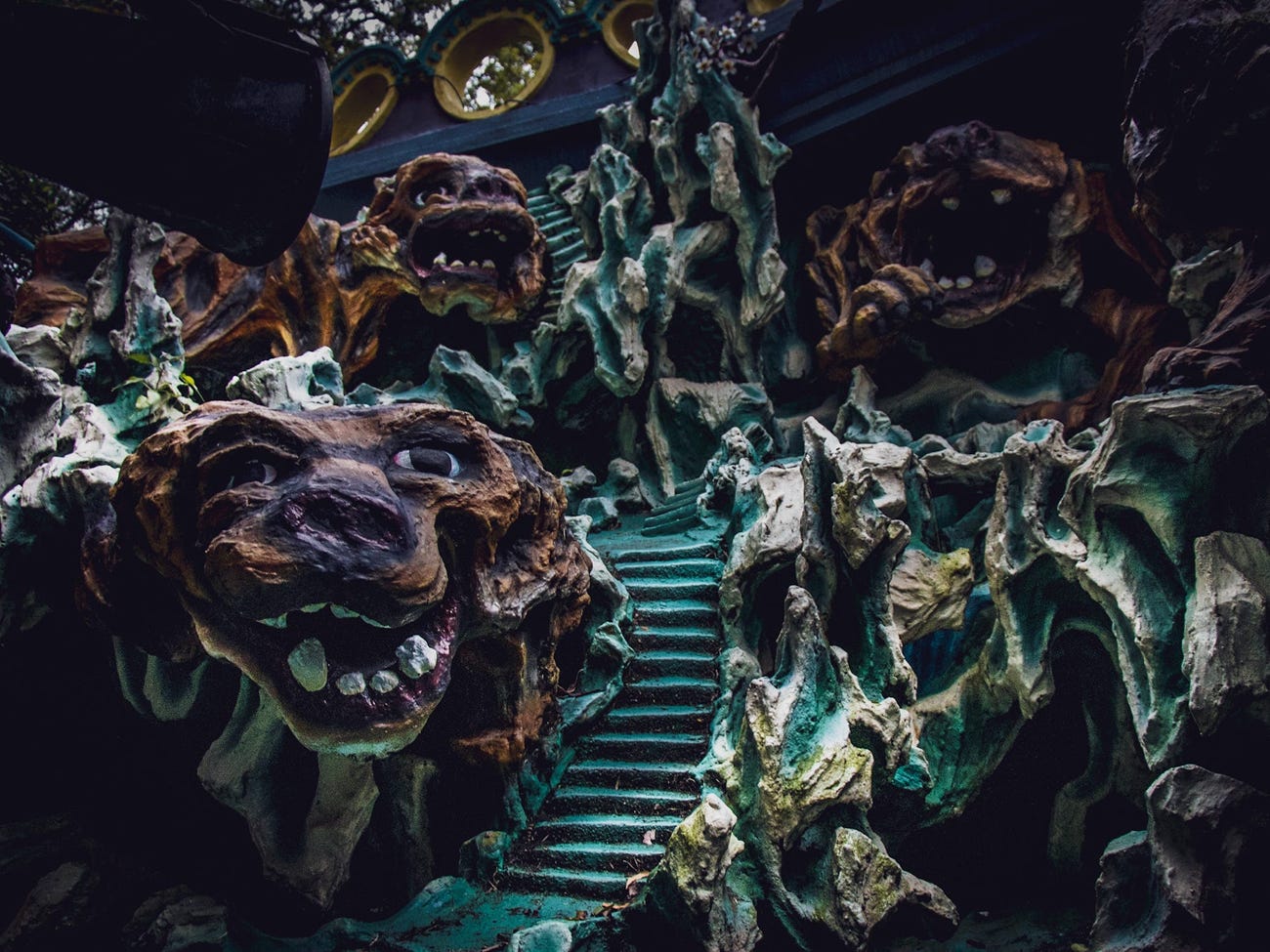 It isn't comforting to think that this park was built as a fun way to teach children about Buddist, Confucian, and Taoist mythology.  This might not be the most kid-friendly place.

The outdoor park is open daily from 9 am to 10 pm.

You can visit the Hell Museum from Wednesdays – to Sundays from 10 am to 6 pm.  Last entry at 5 pm.

Aw, Boon Hoon was the man behind the tiger balm brand.  He built a garden and villa for his younger brother.  The space also functioned as a marketing tool for the Tiger balm brand.  After world war 2, the estate was severely damaged. The park stayed badly damaged until the death of Aw Boon Hoon's brother.  For the following nine years before his death, Aw Boon Hoon spent every day with contractors and artisans to rebuild the sculptures and dioramas.  As of 1988, The Singapore Tourism board has become the park owner. 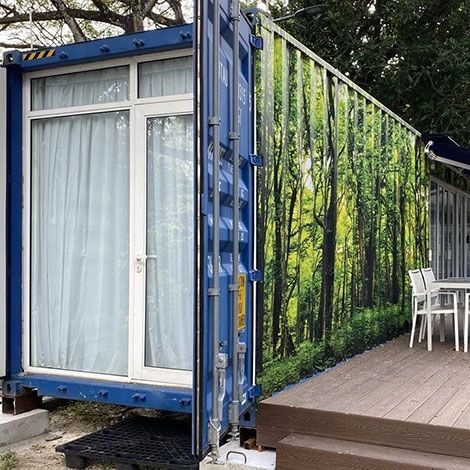 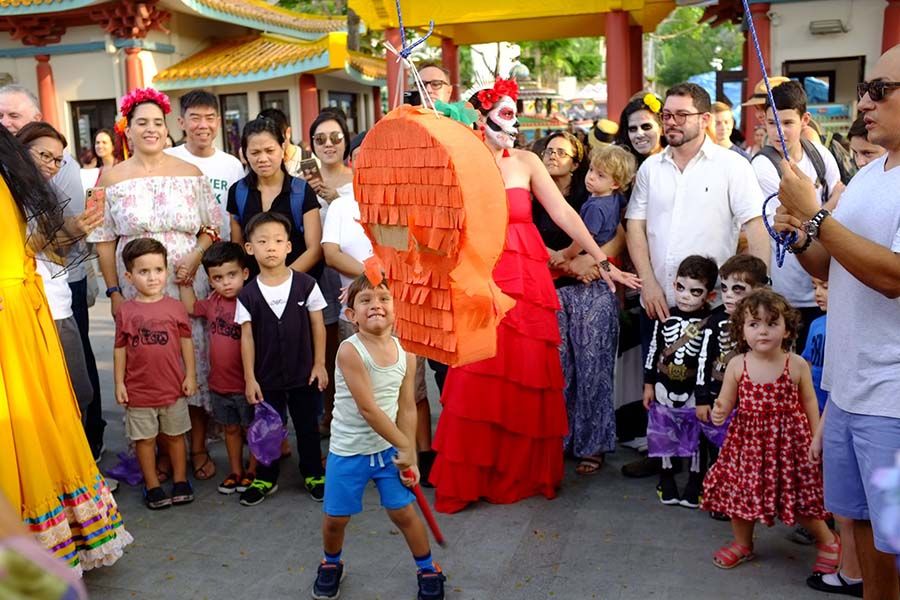 How much does it cost to visit Haw Par Villa?

The park is free, but you will have to pay an entrance fee for the Hell Museum.  It is recommended to book tickets online.  The tickets cost approximately 18$ for adults and 10$ for children. However, it is not recommended for children under 9 to visit the park due to the gruesome and vivid nature of some of the scenes on display.

Where exactly is the park?

The park can be found on a hill in Pasir Panjang, Singapore.  It is located close to the National University of Singapore.

How to get there?

Take the Circle Line and stop at the Haw Villa station – the park is a minute away from the station.

The park and museum follow all the authorities' recommended safety procedures. Adults must be fully vaccinated to enter the exception for children under 12. 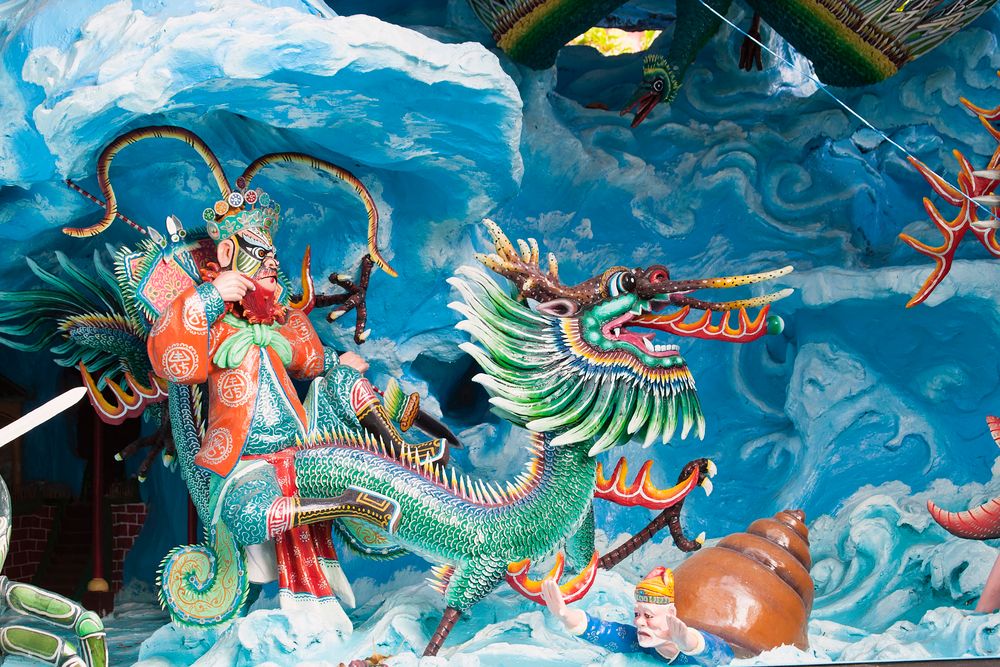 Although this is a very strange place, I can bet you have never experienced anything like this. Why not shy away from the glistening, modernized Singaporean city and see this once-in-a-lifetime hellish experience. Remember, the process of getting a Visa is hassle-free through Atlys, also have a look at Singapore Visa requirements before you go.

References: Take a look at these websites to find more pictures of Haw Par Villa:

This post covers everything you need to know about the Singapore Work Visa including the types of Work visas, requirements and how to apply.

Have You Tried The 2$ Michelin Meal In Singapore?

Have you ever had a Michelin star meal? Discover the 2$ Michelin meal you can have at a Hawker stall in Singapore. Read up about other Michelin star stalls in Singapore and which weird dish also received this honorable title.

The most visited cities in the world

Discover the most visited cities in the world. Read about why these destinations are so popular and special in the eyes of international travellers.

Travel To Singapore From The US