How Many Countries Are In Europe And Which Are They?

A big part of Eurasia's landmass in the Northern Hemisphere and the Eastern Hemisphere is covered by Europe. Europe is the second smaller continent on the planet and shares its continental landmass with Asia and Africa.

The Arctic Ocean surrounds Europe to the north, the Atlantic Ocean to the west, the Mediterranean Sea to the south, and Asia to the east.

The Italian peninsula extends from the southern Alps in the north to the central Mediterranean Sea in the south. On the other hand, the Balkan Peninsula in Southeast Europe and the Fennoscandian Peninsula in the north of Europe demonstrate the diversity in geography across Europe.

Water bodies such as the Ural Mountains, the Ural River, the Caspian Sea, the Greater Caucasus, the Black Sea, and the waterways of the Turkish Straits separate Europe from Asia.

Though Europe is a sought-after destination to visit, not many people know of its varied topography. Major countries in Europe, such as the UK, Germany, France, and Italy, are well recognized; however, Europe has many lesser-known countries with a lot to offer.

If you wish to visit these beautiful countries and need to apply for a visa, look no further. You can do it all directly on Atlys.

Let us conquer the topic of Europe starting with this question:

How Many Countries Are There In Europe?

For many years, Europe has been divided, not just by borders but also historically, culturally, geographically, and economically. First, however, we are here to discuss how Europe is divided geographically.

Mainly Europe can be divided into four regions:

Some of the countries in these regions are de facto independent countries with limited to no international recognition. Additionally, there are several dependencies and similar territories with broad autonomy. Europe also shares some of these countries with Asia, known as transcontinental countries.

Which Countries Are In Europe?

As mentioned earlier, European Countries can be classified into four main geographical regions. Therefore, I have segregated these countries according to their geographical location, the de facto countries, and territories.

Dependencies And Territories In Europe

Which Are The Nordic Countries?

When people talk about the Nordic countries, they tend to confuse them with Scandanavian countries. Hence, I decided to talk a little about the difference.

However, Nordic identity is a product of its linguistic heterogeneity, with three unrelated language communities. Countries and other territories that make up the Nordic region are:

Scandinavian typically refers to Denmark, Norway, Sweden, or the Scandinavian Peninsula. This region extends from mainland Norway and Sweden to the northwest corner of Finland. Occasionally, Scandinavia is used as a synonym for the Nordic countries outside the Nordic region.

These two terms are very confusing, and there is a big grey area when defining these two terms. Though slight differences between the two, it is essentially the same thing.

Which Are The Schengen Member States Vs European Union?

Before knowing which country belongs to which entity, it is essential to learn about the difference between the two entities.

As you will see below, many of the same countries are part of the Schengen Area and European Union or EU.

Many European countries signed the Schengen Agreement to allow the free movement of people between the signing countries, which is now known as the Schengen Area. Due to the agreement, these countries have abolished all passports and other border control types at their mutual borders.

26 countries have signed the Schengen Agreements, which comprise of:

The European Union was established as a political and economic union of several countries in Europe. These countries have a standardized system of laws that governs a single internal market, allowing them to maintain standard trade, agriculture, fisheries, and regional development policies.

Here is a diagram showing the relationships between various multinational European organizations and agreements. 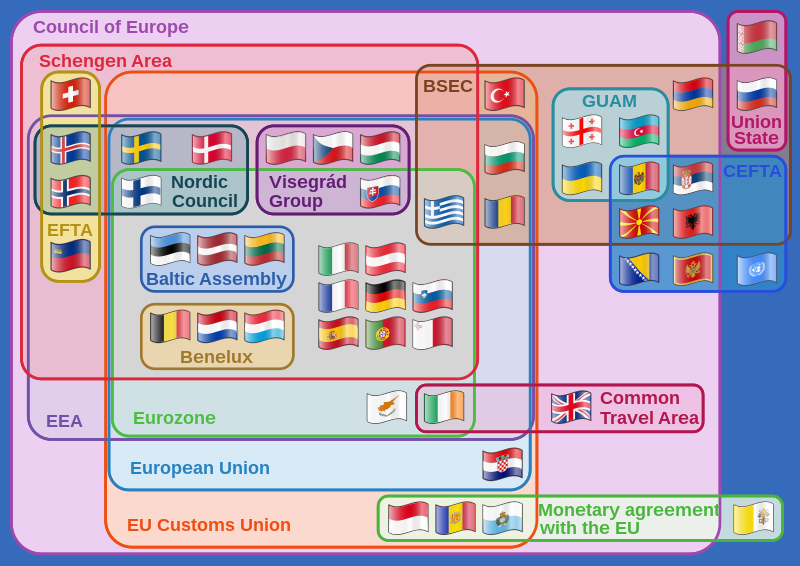 Disclaimer: Soon, the countries that enjoy visa-free travel will have to register with ETIAS. You must check our detailed blog on ETIAS or read more about the Schengen Area

What Are The Languages Spoken In Europe?

There are about 225 indigenous European languages. Some of those languages are:

Baltic Languages include Lithuanian and Latvian.

Celtic languages such as Welsh, Cornish, Gaelic, and Breton.

What Are Some Things I Can Do In Europe?

Well, now you know pretty much everything about the countries in Europe but what can you do in Europe on a vacation?

From the breathtaking Eiffel Tower in Paris to the town of history in Athens Europe lacks nothing. Instead of listing names after names of places, I suggest you have a look at the Europe tour packages and plan out your perfect holiday!

I hope this blog showed you the diversity among European countries. Each country has something different to offer historically and geographically.

How I Got A Schengen Visa In A Week

How Long Does It Take To Get A Schengen Visa

France Schengen Visa Processing Time. In this post you'll find some helpful tips you can use when you start your next Schengen Visa Application process.

Learn what documents you need to submit when applying for the Netherlands Schengen Visa. Also, increase your visa applications chance's of successes by adding these additional documents.