The Eeriest Turkey Tombs You Never Knew About

Turkey is a country known for its enchanting beauty.  It is also the country where you can take the most captivating hot air balloon rides. 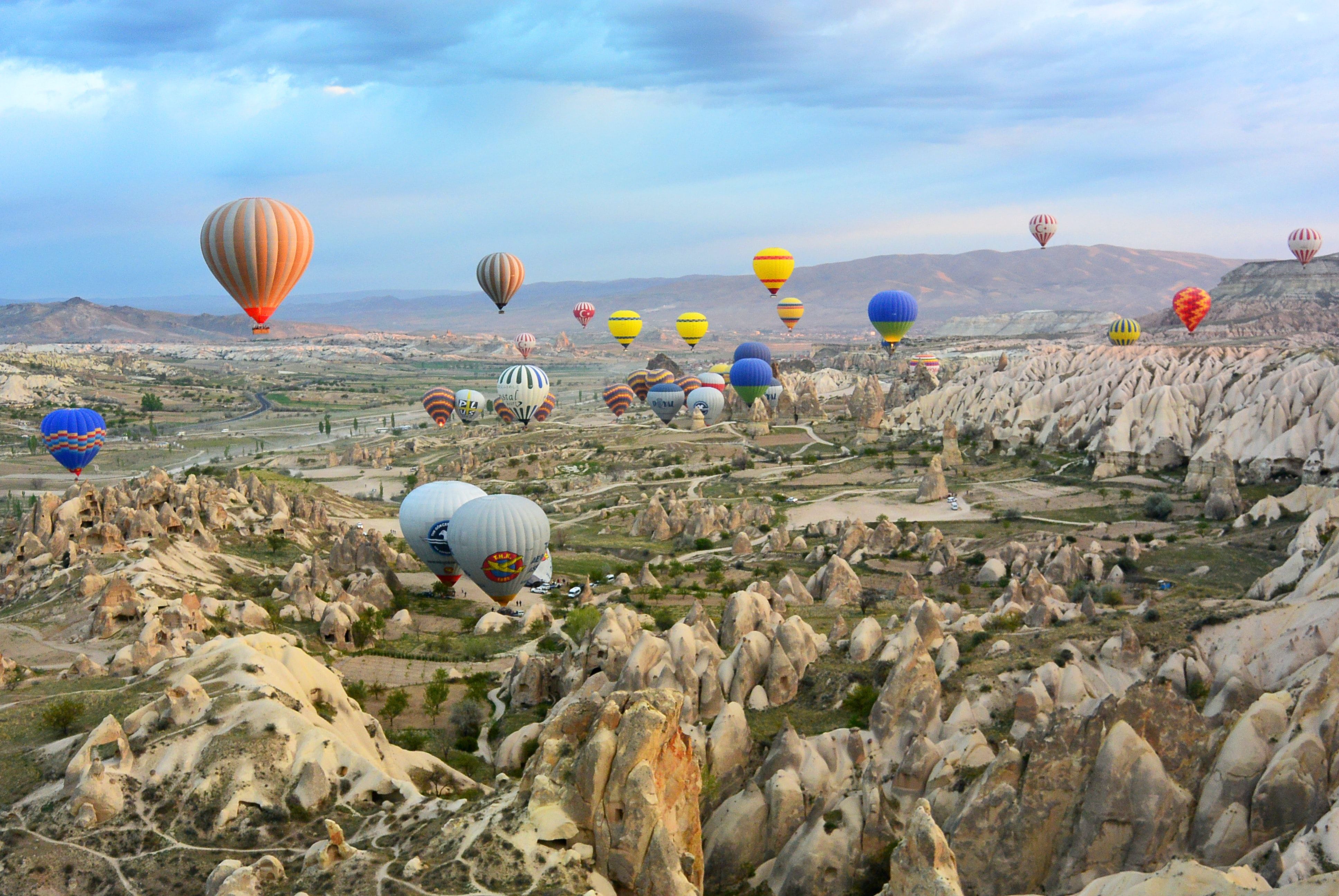 Turkey is known for its beaches, and tourists travel from all over to see these beautiful beaches, but it offers a wide range of gorgeous woodlands and mountains. 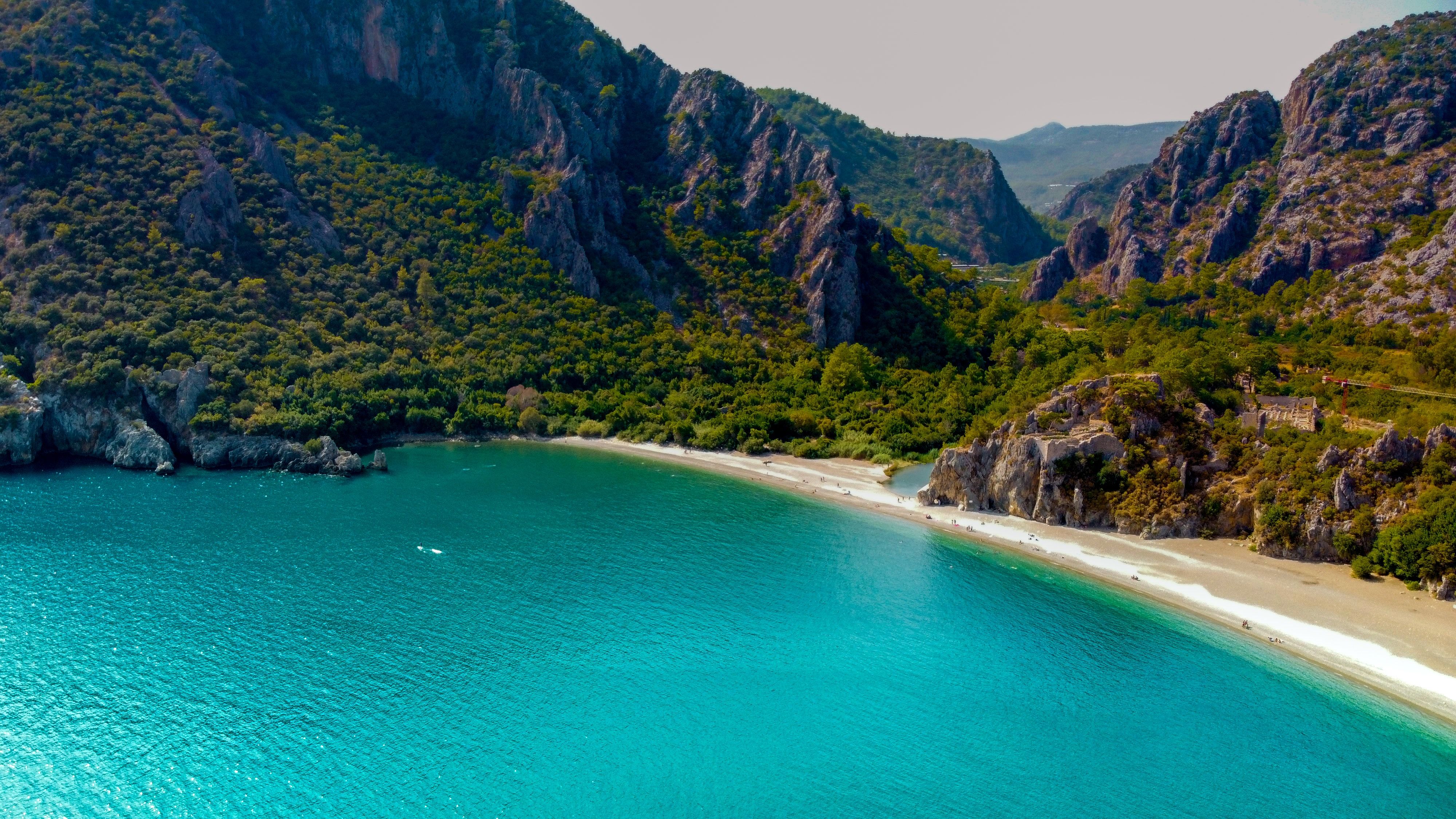 However Turkey has much more to offer than dreamy scenery. Turkey has a dark history and some captivating tombs that will chill you to the bone and take your breath away at the same time. Let’s discover some of these tombs.

Turkey offers many beautiful destinations and some creepy and weird tombs that are a definite must-see.

Unfortunately, not many people know about this fantastic, bizarre destination—something straight out of an alien-conspiracy theory.

Nestled between the Taurus mountain range peaks, you can find the sculptures in Nemrut Dag. 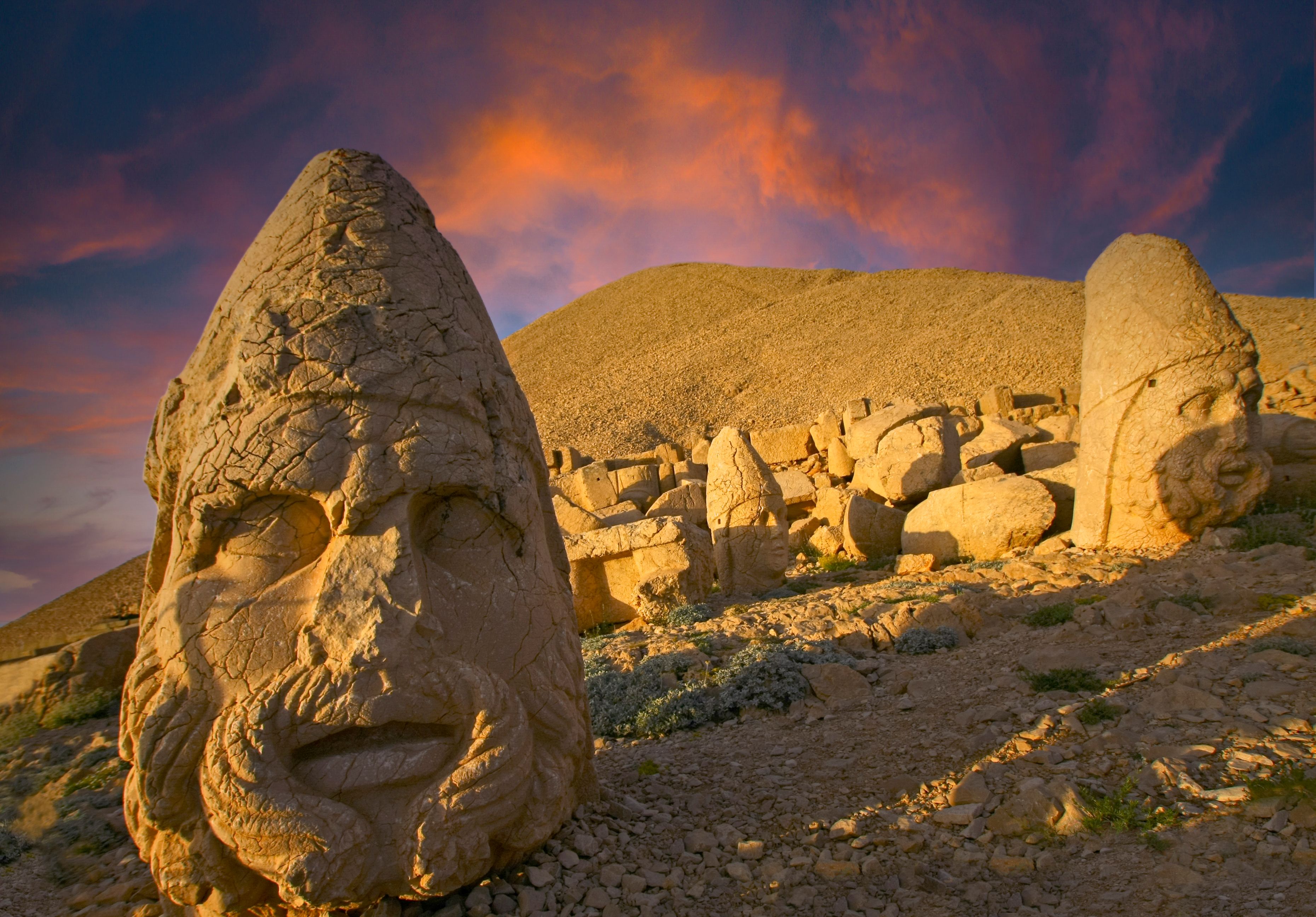 Mount Nemrut is home to the fantastic captivating burial site of King Antiochus I, crowning this Kingdom as a Unesco World heritage site. Underneath the 50m, high artificial burial assemblage is the concealed tomb of Antiochus’.  Interestingly though the tomb has never been found, extensive Archeological work has yielded no clues as to where the tomb can be found.

The colossal figures can be seen to stand 8 to 10m high.

Zeus, Heracles, Ares, and Apollo can be seen in addition to the lion and eagle head statue, all facing the direction of the main altar. Antiochus is represented as a statue here as well.  These can be found on the summit east terrace, and these statues are the best persevered of all the figures. 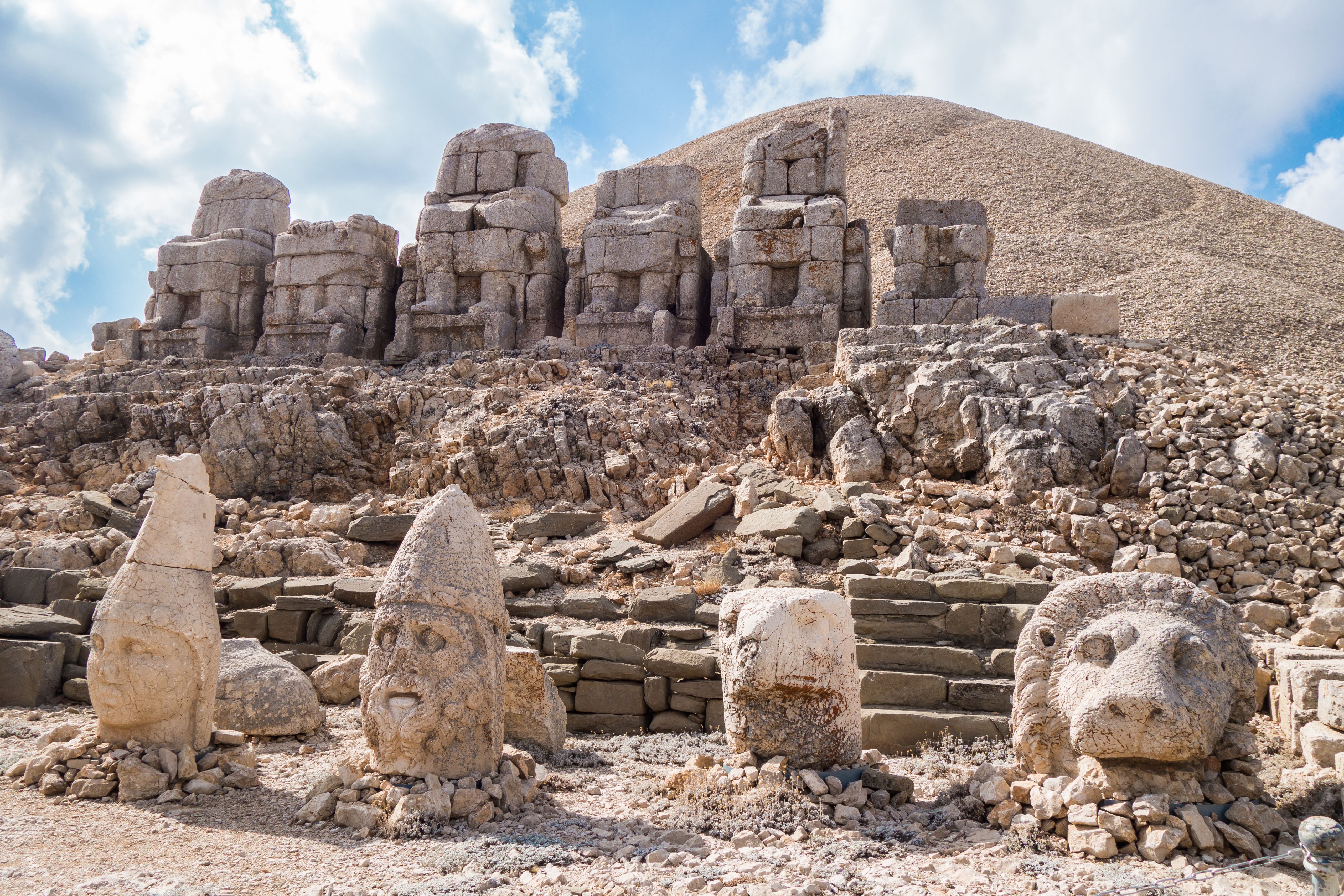 You will find the Lion Horoscope on the West terrace, the astral symbolization that depicts the king(Antiochus) metamorphizing into a star.  Unfortunately, time and weather have not been kind to these statues, and their well-preserved heads can be seen next to their not so well preserved dismembered bodies.

The best time to visit the site is at sunrise or sunset because then you can see the beauty of these colossal statues as the sunbeams illuminate all their unique features.

Where to stay near Nemrut Dag

The quaint village of Karadut is the closest to the site.  This cute village offers many guesthouses, with most offering sunrise tours and transport to the site. Alternatively, if you have your own car, you can opt for the town of Adiyaman; keep in mind that you will have to factor in much traveling time as the city is approximately 70km from the site.

This eerie sight is often described as the ‘city of the dead.’ 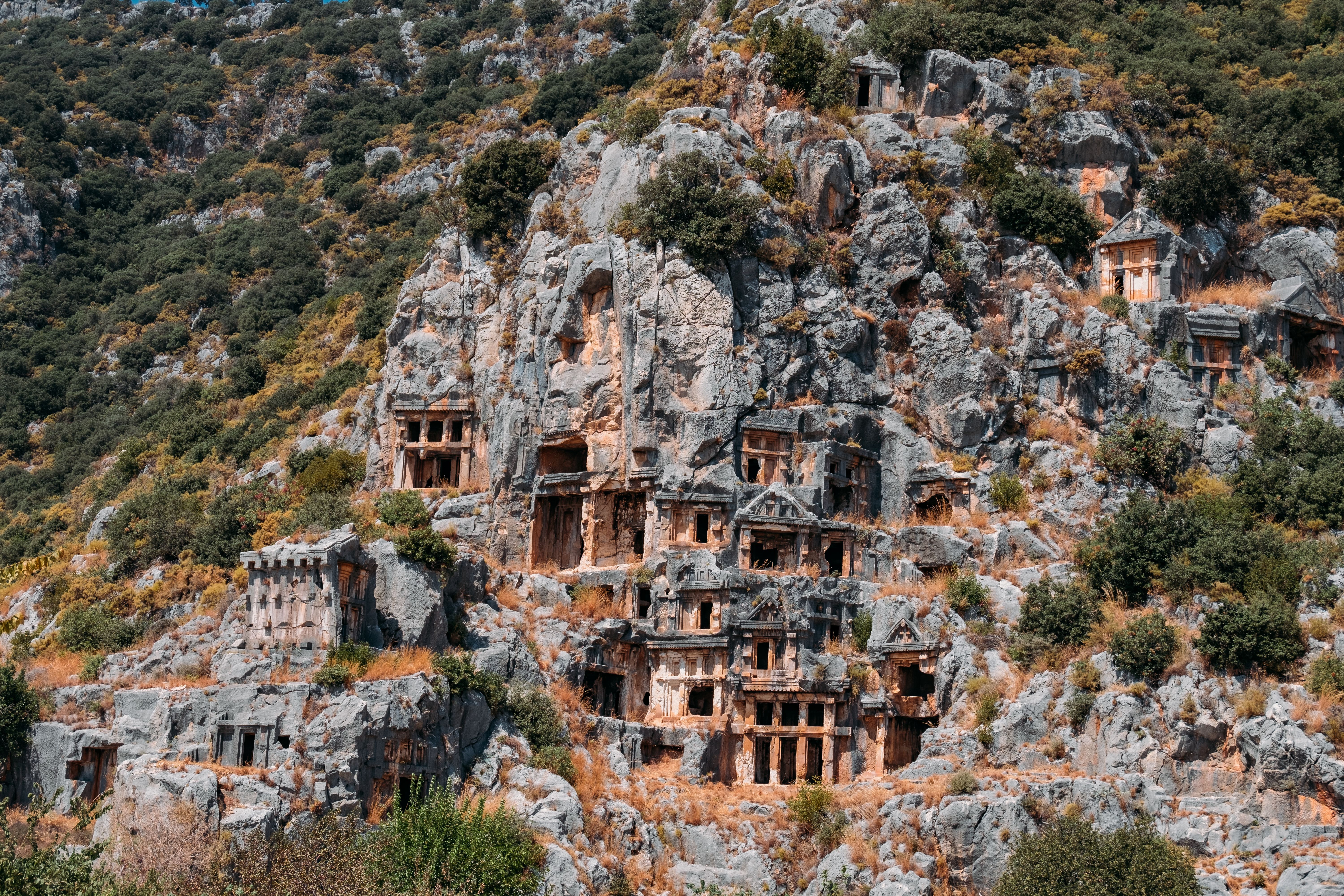 These tombs can be found carved into the hillside of Southern Turkey.  Lycian graves were always placed on the top of hills or cliffs as it was believed that a winged creature would transport the dead to another world.  This specific tomb was also built overlooking the town as it was thought that the dead kept an eye over the living.  The tombs housed the bodies of the most prominent citizens.

Dating back hundreds of years ago, these tombs were painted in bright colors – unfortunately, with time, these colors have faded and are not so noticeable.

Another beautiful site to see here is the theatre. This gaint theatre can seat approximately 12 000 people.  Unfortunately, the theatre was severely damaged by an earthquake in 141 AD, but wealthy community members did restore the theatre to its original beauty.

Where to stay near Myra Tombs

You can find accommodation in the town of Demre.  From there you can complete the 3km trip by foot or by taxi.

The uninhabited island off the coast of Fethiye Meditarrean shore is not just a scene of elegant coastal beauty but also the burial site of the saint St. Nicholas. The small island only measures 1000m by 400m across. 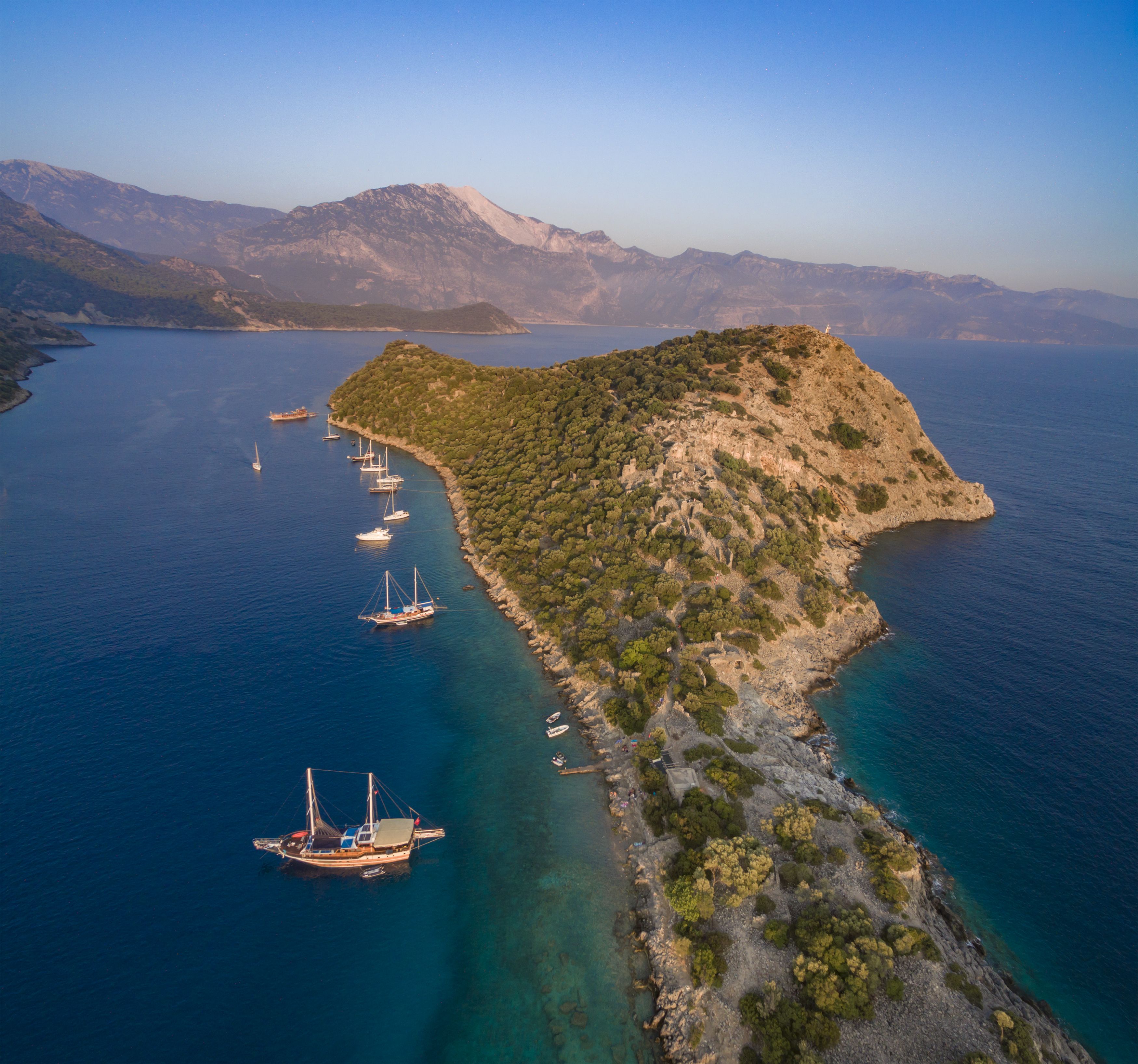 It is said that the island was nicknamed Saint Nicholas as the island provided a safe harbor during violent storms.  Due to the fact that mainlands surround the island, the island is reasonably protected during bad weather.  It is also believed that St. Nicholas’s tomb can be found inside the island's ruined church.

The strangest fact about the island is the lack of fresh water; thus, all necessities has to be transported by boat.  This could describe why the Turkish meaning of Gemiler Adasi means ‘boat island’.  Secondly, the only thing found in the little documentation about this island Is that children took their mothers’ last name instead of their fathers’. 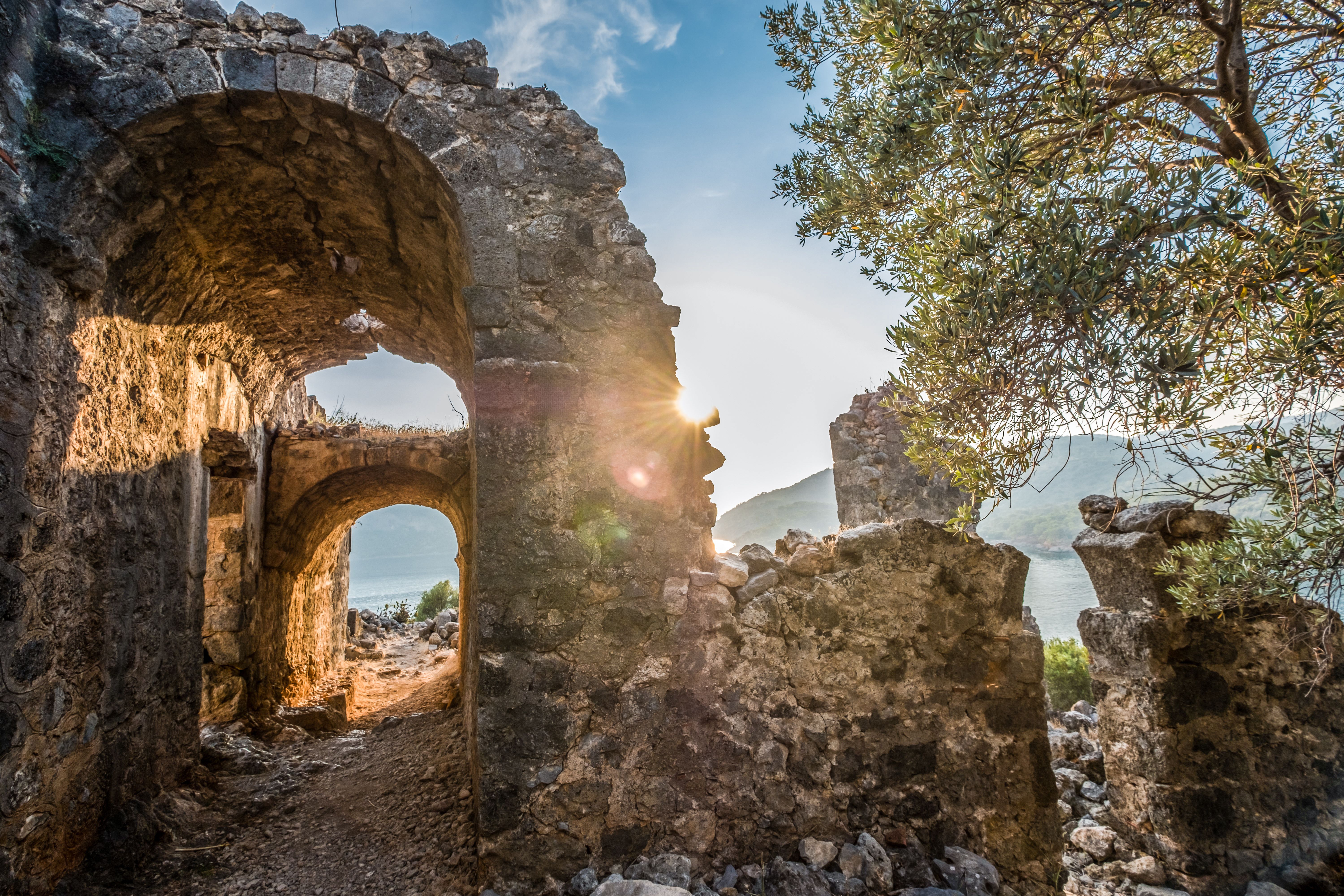 Make sure to take a walk down the 350m long processional walkway, this is arguably one of the most beautiful sites on the island.  There are many pathways on the island, and visitors love to walk the trails and explore with a tour guide. 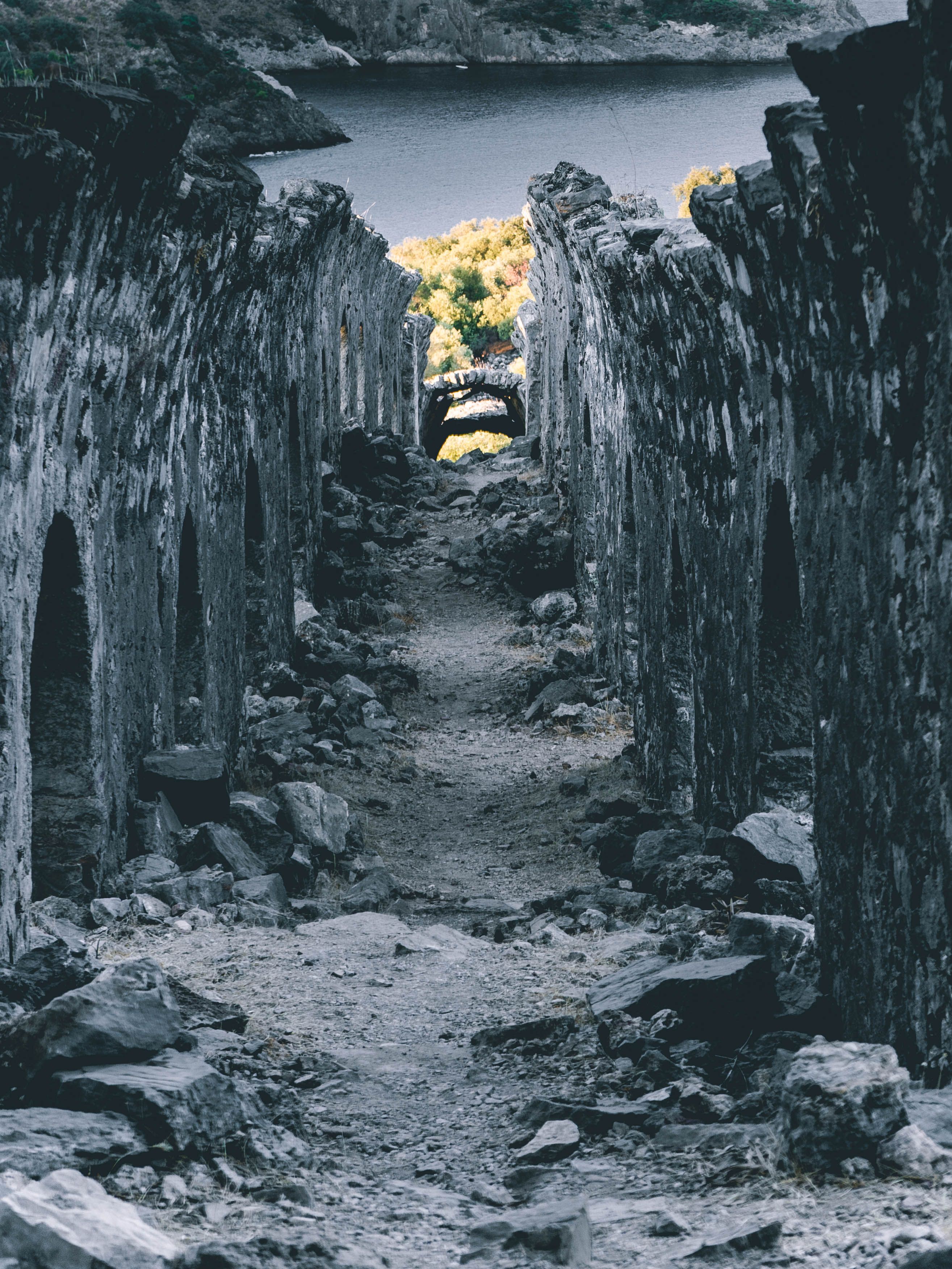 How to get to Gemiler Island

The island is only accessible by boat trip.  It is recommended to stay in Fethiye. This is the best place for a beautiful seaside stay, and most hotels will also be able to help you set up a boat trip to Gemiler Island.

Honeycombs are a great visual depiction of these tombs.  Craved into a round cliff, you can see sets of rectangular tombs. 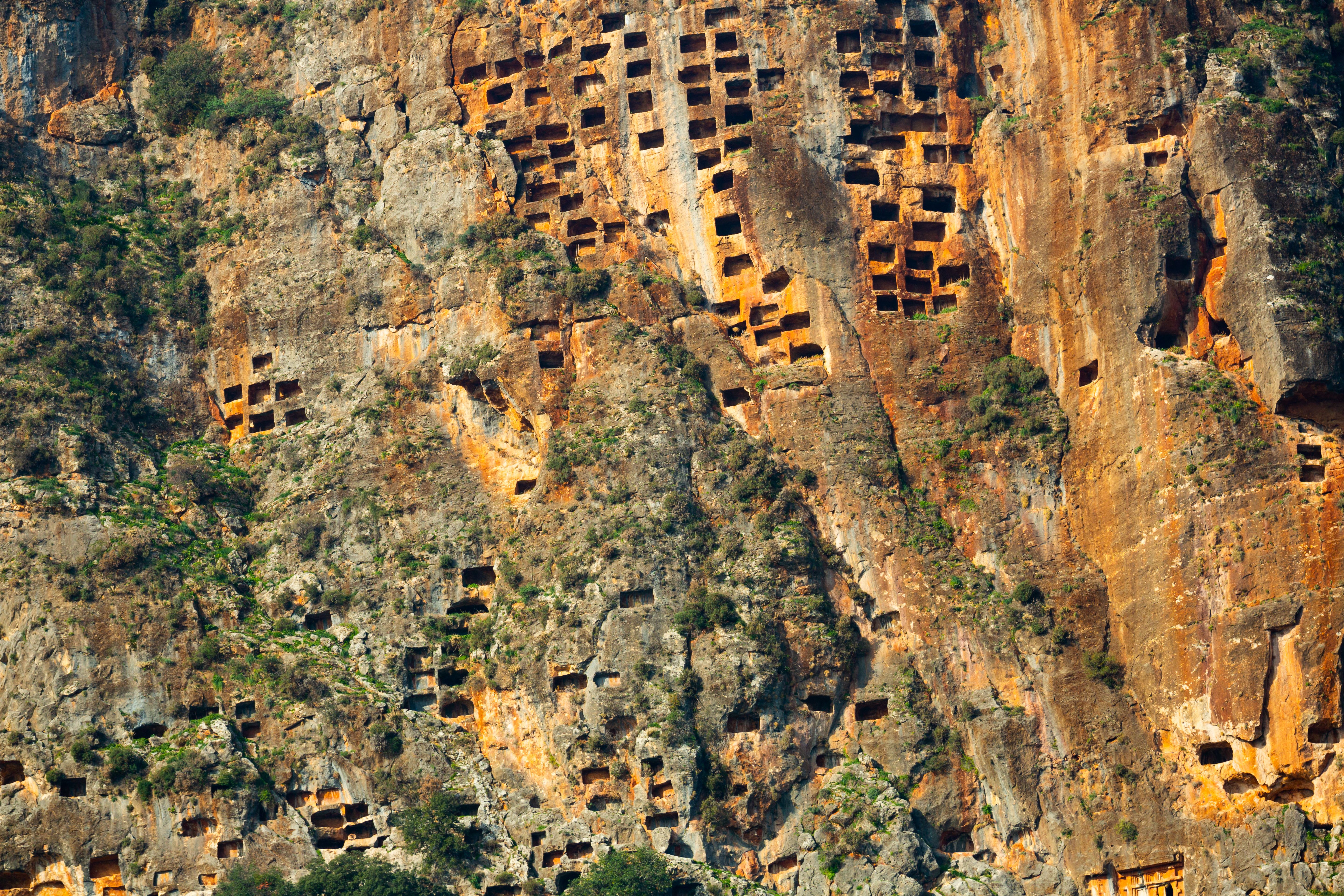 The tombs can be found in a very remote area, and you will have to climb a hill and follow a dirt road to reach these tombs.

Visiting this site is magical; due to the remoteness, not many people see it, causing the area to retain its mystical and tranquil atmosphere.

One of the most spectacular tombs to be seen here is the ‘Royal Tomb’.  This tomb was integrity built to depict a walled city.  The tomb was the burial ground of an important ruler. 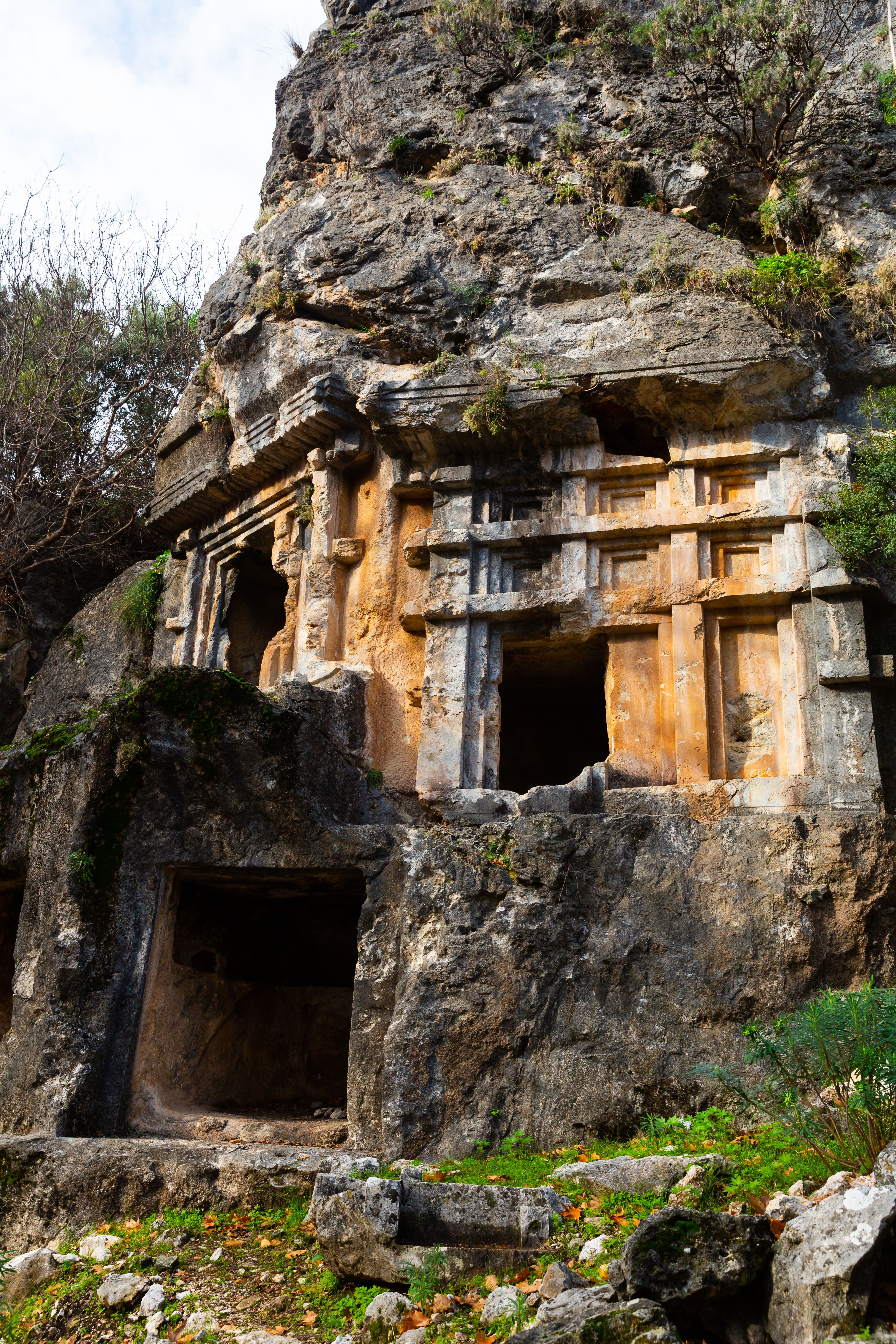 Where to stay in Pinara

The area is very remote, and although you can take a bus to Minare, it is still a way to go from there.  Taxis are available, but accommodation not so much.  You will have to consider camping.

Turkey is a country rich in cultural heritage and ancient buildings, and these tombs are some of the most incredible tombs in the world.  With most being so well-preserved, it is a must-see.

Turkey offers so much for typical tourists as well as digital nomads, so don’t stall to read up about Visa requirements for Turkey. Atlys is the only way to get a visa effortlessly!

How We Completed Our Turkish e Visa Applications

Andrew Graham walks us through his struggles while applying and trying to pay for their Turkish e-Visas. He recommends a simple way to get around payment errors faced by many travelers when applying for a Turkey e-visa.

If you want to travel to Turkey as a Family or a Group we'll show you exactly how to complete your Turkey e-Visa application for multiple applicants.

Turkey Visa For US Citizens

In this post, you will find important information about the Turkey Visa from the US. This post outline the Turkey Visa requirements, the application process, and more. We'll ensure you are ready for your next trip to Turkey.

Want to travel to Turkey and apply for a visa but not sure what the Turkey Visa Requirements are? In this blog you will find everything you need to know about the visa requirements for Turkey including visa costs.

The step-by-step guide on how to apply for a Turkey E-visa. All US citizens, Permanent Residents, and Schengen Visa Holders are eligible for a Turkey online e-visa. This post includes the application process, requirements, costs, and processing time.