Visiting The Pyramids Of Giza In Egypt: Exploring Inside The Great Pyramid Of Giza

Nothing can prepare you for the awe-inspiring wonder and the ethereal beauty of the magnificent Pyramids of Giza. So much history is attached to these manmade marvels and the realization that these wonders were done millennia ago is surreal.

I am here today to talk to you about my experience inside the Great Pyramid of Giza. This blog is not your typical “how to get tickets” or “how to book your tours”. But, wait, you also want to know about that? Okay, I got you; you’ll find that at the end. But, first, I cannot wait to rave enough about my experience exploring the Giza Pyramid Complex.

And let me tell you, my experience at the Pyramids of Giza was nothing less than the best time of my life. So, gather around my adventurers and travelers because this blog will be an absolute delight for you. So get your Egypt Visa ready, and start pacing. 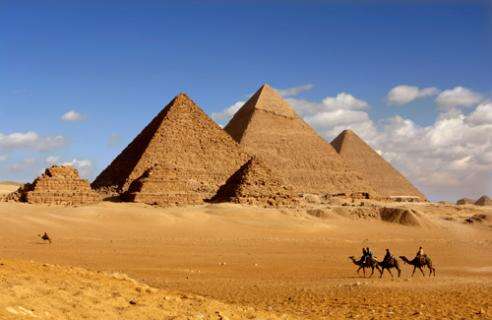 In person, it’s astounding when you look at the size and symmetry of the pyramids. And to think - they made such a wondrous structure so many years ago. The reality is: standing next to the Pyramids makes you feel meek and small.

There are three pyramids in the Giza Pyramid complex, built by three pharaohs, each pyramid smaller than the other. The biggest is the Great Pyramid of Giza, aka the Pyramid of Khufu, the slightly smaller Pyramid of Khafre, and the relatively modest-sized Pyramid of Menkaure.

A fun fact, the largest pyramid has approximately 5-6 million tonnes of stones and is 146 meters high. And when you see the pyramid in person, what surprises you the most is how big the stones are. Just look at the size of one block next to the person. 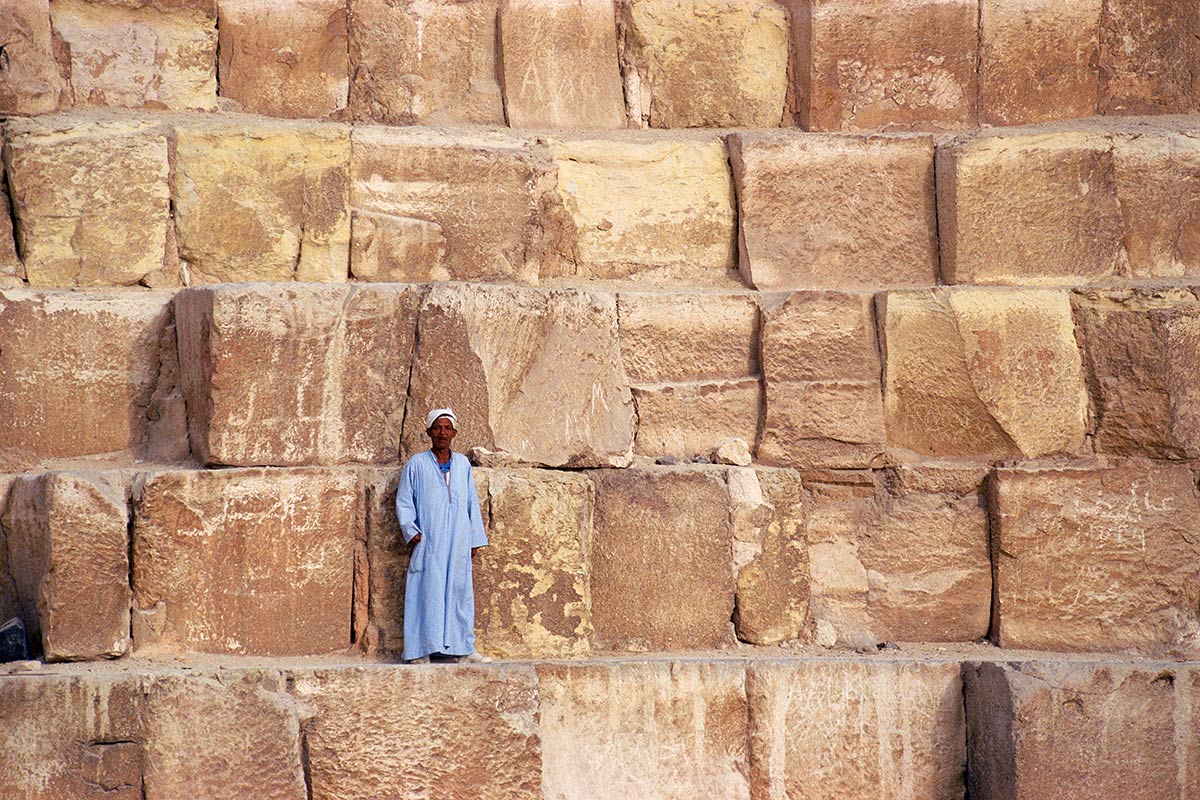 The stones used are humongous and literally bigger than you, and I could not comprehend how they could have made this structure thousands of years ago.

A tip! To enjoy the pyramid’s view throughout your stay, book a hotel with a gorgeous view of the Pyramids of Giza. The view of the pyramids, especially at night, is absolutely breathtaking! 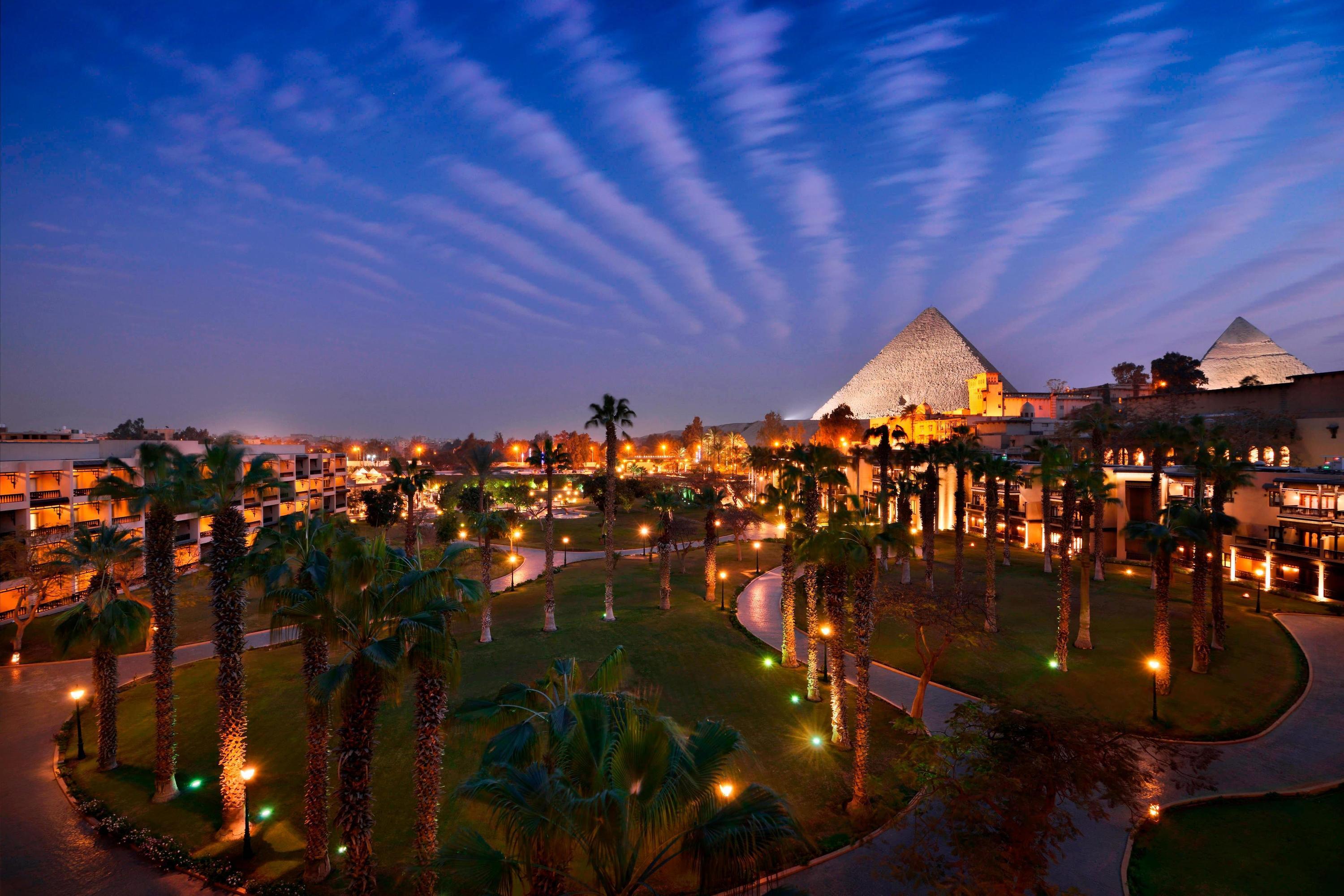 Can You Go Inside The Pyramids Of Giza?

Oh, HECK YES! This was the biggest reason for me being there. Seeing the inside of the pyramid was on the top of my bucket list in Egypt.

Going inside the pyramid felt like I was traveling back in time. The excitement and anticipation were really getting to me. I felt like an explorer going into the darkness to uncover the pyramid’s secrets.

You have to go through small passages and tunnels to go inside the pyramid. While you’re in these passageways, you can see the sun shining through the cracks on the inside of the pyramid. It honestly feels dreamlike.

There are three chambers in the pyramid, the underground chamber, the Queen’s chamber, and the King’s chamber. You go through a very narrow tunnel to enter these chambers, and you’ll have to walk scooched down.

Quick note: If you fear small spaces (claustrophobia), I don’t recommend exploring the pyramids. Should you pass out, your guide will have to drag you out. 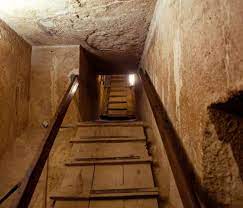 After walking for a few minutes, you will reach an opening known as the Grand Gallery. At this point, you can choose to either climb up to the King’s chamber or continue further to get to the Queen’s chamber.

I first walked towards the Queen’s chamber. There, you’ll reach a small opening that is said to once have held the sacred statue of the Pharaoh. 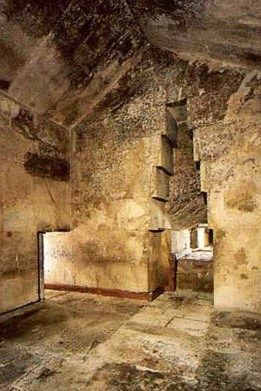 Later I made my way up from the grand gallery, a large passageway to the King’s chamber. To go to the King’s chamber, you first have to crawl through another small tunnel about 1 meter high to get to the other side. And for someone like me who doesn’t exercise much, it proved to be quite a workout.

Here you can really see how different the King’s chamber is from the rest of the pyramid. This is because a different type of stone was used to make this chamber to ensure that the chamber would not collapse and would hold the Pharaoh’s mummified body for centuries.

Well, to tell you the truth, the lowest moment of this trip was when we went to the King’s chamber - ​​​​there were no mummies or any gold inside.

I know you must be thinking how silly can this girl be. But hey, cut me some slack. I have watched too many movies, and after watching ‘Brendan Fraser’s The Mummy,’ my expectations became unreal. Also, wouldn’t it be fun to at least see a fake mummy or something instead of the empty​​ sarcophagus? 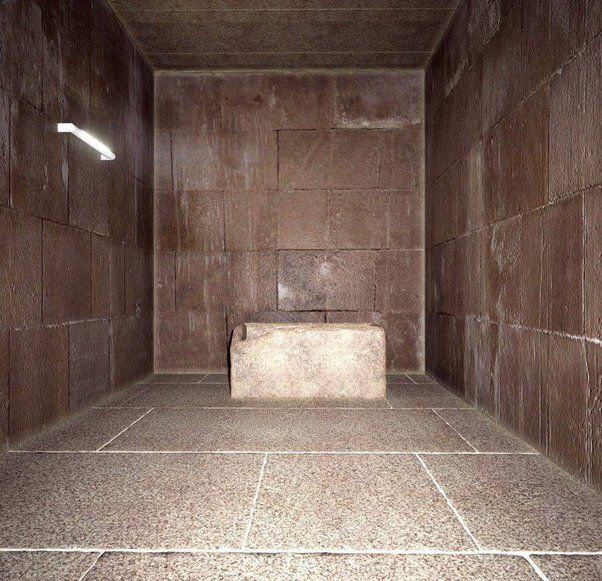 What Else Can You Do Around The Pyramids Of Giza?

Moving on with other fun things that we did.

Side note to all my animal lovers: No camels were harmed, and they were all well fed, looked healthy, and the guides were also kind to them.

The other best thing we did was buy tickets for the Sound and Light Shows at the Giza Pyramids! Trust me, the light show is definitely something you wouldn’t want to miss.

Remember to explore the whole Giza complex, don’t be afraid to wander a little. We saw the ​​Great Sphinx of Giza and visited the ship docks they used to bring the stones in, the cemeteries, and the Solar Boat Museum.

If the day is too hot, do not forget to take a good amount of water with you. Additionally, if you want to buy a souvenir or two from the shops at the Giza complex, bring some cash with you. We actually have a post on the best time to visit Egypt so check that out.

Finally, as promised earlier, I’ll explain how you can enjoy your own Egyptian Pyramid adventure.

How To Get To The Pyramids Of Giza In Egypt?

First, you need to apply for an Egypt Visa. If you have booked your stay in Cairo, you will have to arrange your ride or ask hotel staff to arrange one to the pyramids. Or if you stay in Giza like me, you can take a short taxi ride. Additionally, you can enjoy the pyramid’s view from your hotel!

How Much Does The Pyramids Of Giza Ticket Cost?

The site opens every day between 8 am to 5 pm from October-March, and from 7 am to 7 pm every day between April-September. Most tour buses arrive around 9:30 – 10 am, so if you want to experience the site when it’s less busy, try to reach early.

General site entrance tickets are 200 EGP ( around $11 / $ 10) with additional tickets for the pyramids themselves.

Can You Climb The Pyramids of Giza?

NO. It is illegal to climb the pyramids. Although people have successfully climbed the Great Pyramid of Giza in the past.

I have also heard that police would let you climb the pyramids for a tip. However, I’m not ready to commit two crimes.

What Must I Wear When Visiting The Pyramids of Giza?

Depending on the weather, wear something comfortable, especially your footwear. Wear comfortable shoes as you will be walking a lot.

And folks, that was my experience at the Pyramids of Giza. I know you might think she hyped us all, and the blog is already ending here. But hey, I see you made it till here, and you wouldn’t have if you didn’t like it.

I will see you on our next adventure. Until then, Happy Traveling!

How To Apply For An Egyptian e Visa

If you have a problem paying your Egypt e-visa, this post has got you covered. This post includes everything you need to know about the Egypt E-visa payment issues and some solutions.

Is Egypt A Safe Country For Travel?

Egypt is a magnificent country with a lot to offer. But with the recent activities happening in Egypt, is it still a safe country for travel? Find out all the information in this travel advisory on Egypt.

Mistakes To Avoid When Visiting Egypt

This post is about helping you make the best of your Egypt trip! You'll find visa-related errors and tourist-related mistakes to avoid.

Here you will find all the relevant information about Egypt's Visa on Arrival. Find out the requirements and how to apply for Egypt Visa On Arrival.

An in-depth look at the 10-Year Indian Visa For US Citizens. From the required documents, the application process, and the fees.